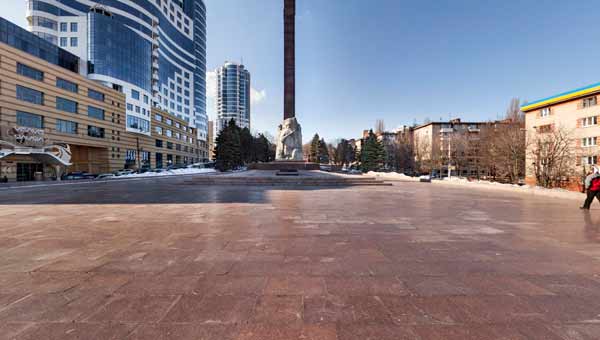 Monument of Glory in Dnepropetrovsk – a symbol of memory of the exploits of a soldier in the Second World War. And to be precise, it is the memory of the soldiers, partisans and underground fighters who died defending their homeland.
The monument was opened on October 31, 1967. Sculptors – VI Agibalov and MF Ovsyankin. Architects AA Maksimenko, EY Cherkasov.
The monument towers over Quay Victory stele pierces the sky, and the sight is directed to the broad waters of the Dnieper.
At the foot of the monument are always lit an eternal flame, which does not allow to forget the feat of our heroes.
From the square, where a monument of Glory, begins the main avenue of Dnepropetrovsk – the name of Karl Marx.
In Dnepropetrovsk Architects is a characteristic feature – build a wonderful, beautiful, enormous building, but they hide the beauty of other architectural structures and look at exactly this point. This is what happened with the monument of Glory: now because of modern buildings can be photographed monument just behind, in another case it is lost among the ultra-modern high-rises.